Migrant women in the workforce 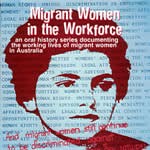 Documenting the contribution of migrant women to Australian working life

The ten programs in this audio series were produced by migrant women community broadcasters from around Australia and tell the stories of migrant women in all kinds of workplaces from factory floors to the courtrooms of Australia.

Listen to snippets from the CD below or contact the NEMBC for a copy of the full programs.

Carmela Mezzapica came to Australia from a small Island in the south of Italy, and together with her husband Angelo started the first Italian cake shop in Leichhardt, in what became known as Sydney’s Little Italy.

Jan Wehipeihana and Tearani Roberta Cohen are Maori women from Aotearoa in New Zealand. Jan left school at fifteen to take up an apprenticeship in the rag trade before moving to Australia in 1976. Tearani worked in an office before deciding to become a truck driver. Both women are now part of a growing team of women bus drivers.

Eugenia Castro is a political refugee from El Salvador, while María Cabellos Yañez escaped the Pinochet dictatorship in Chile. They tell of their experiences learning English, raising a family, studying and working in Australia.

Migrant Women in the Sex Industry

Dela Pon, from Thailand, was an outworker in the garment industry in Melbourne but she could not earn enough to support her family, so she became a sex worker. Weng Morales from the Philippines, is one of the increasing numbers of women trafficked all over the world for the purposes of prostitution.

The Great ACT Laundry Strike of 1987

Chilean refugee Elba Cruz tells the story of a strike by laundry workers, which changed the lives of all the women involved.

Migrant Women in the Arts

Dondu Akbhati and Samia Mikhail are two migrant women who are carving out a place for themselves within Australia’s cultural life. Dondu has worked on theatre and multimedia projects while Samia is a film maker.

Migrant Women in the Health Industry

Profiles three professional women in the health industry: Dr Alka Kothari is an obstetrician and gynaecologist; Carmen Ceñal, a renal nurse and Francesca Mumme, a radiographer. All three work at the Alice Springs Hospital.

In the Woollen Mills

Skaidrite Liepina and Inga Peerson both worked at the Federal Woollen Mills in Geelong. Like many migrant women in the 1950’s arriving by assisted passage, Skaidrite had to complete her two-year commonwealth work contract at the Mill.

This series was produced in 2001 as an audio CD by the NEMBC with the support of the National Council for Centenary of Federation Fund.